Was Elvis a Christian?

“What about your image as a shy, humble country boy” – “well I don’t know what makes you think that, there’s a gold belt, and…”

He inspired a new generation of Americans to take up the guitar and sing sweet soulful melodies about love. You can see his influence in many Hollywood movies and his imprint in the mannerisms of actors in films recorded after his death, in millions of vinyl recordings, in the yearnings of girls the world over when they saw him flexing his hips and pulsating his upper lips. The legend of Elvis Aaron Presley is quite unbelievable – and lives on in pop culture all over the world, worth billions to those that care.

But beyond the superstar status, and the gifts that he lavished on those he knew and loved (his girlfriend Linda Thompson called him a fallen angel for his ridiculous generosity), did you know that he loved Gospel music and held the message of Jesus close to his heart? How do I know this? Well, there was that time that he told his best friend, when close to death, that the only thing worthy of our time here on earth is that we follow Jesus. And when fans spread a massive banner that announced his status irrefutably as ‘Elvis is King’ – he paused a song he was singing, looked deep into the room, and with that charming smirk on his face, said ‘there’s only king honey, and he is Jesus Christ’.

Why then are there so many who wonder if he was a Christian? Is it perhaps because he died in catastrophic circumstances, after a massive battle with drugs, food, and that most perilous of all ills – boredom? 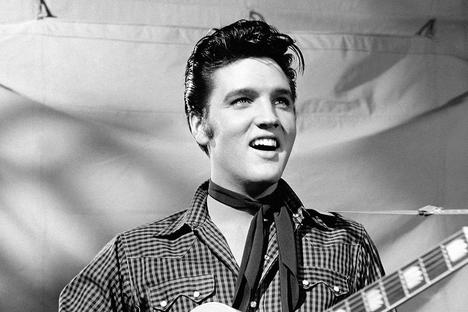 From listening to him singing Gospel songs like ‘He Touched Me’, ‘Amazing Grace’ and ‘Rock My Soul’ – slow, piano versions with that beautiful, wavering, bassy, southern sound so unique to him placed over the top (vocals with bass guitar), I know he loved the master and creator of the universe. You can hear it in the twang, if that’s possible. If someone contradicts me on this, I would ask them why? Why can't you tell a person loves Jesus from hearing them sing? Is singing not the profession of a person’s soul? You may say that you can believe something totally different to what you are singing about, and how you are singing - to which I will reply that, firstly, that who are you to judge? And secondly, less humorously, I might say, well, given you are right, isn’t that desire to profess the Lord's name in such a beautiful way worthy of something?

Why can't you tell a person loves Jesus from hearing them sing?

A good friend and backing singer of his, Donnie Sumner, himself a very sensitive Christian soul with a great love for Elvis, tells of how one day, Elvis wanted to know more about being born again, or what ‘being saved’ really meant. Surprised, the young man responded as many ecclesiastical people might; "Well, the way I understand it, if you believe the story that Jesus really came as they say He did and that He died for sins the way they say He did and the other stuff they say, like, He rose from the dead, went back to Heaven and that He's coming again some day: If you really truly believe all of that and discount any other way to be right with God as you and I believe Him to be, then you are saved”. Elvis, in that laid back way he had, was sitting at the head of the bed in his room. He looked straight at him and said; “well, what happens then?”

Now many of you will say all kinds of things happen then. If you truly believe that, you change your life, you don’t sleep with a hundred girls and you keep your marriage in tact. You don’t go to Vegas and become a bloated pin-up star addicted to prescription bottles, and you put Christ at the centre of everything you do. And I would say that you are right. As a colleague recently told me, being famous is the worst thing that can ever happen to someone.

As a colleague recently told me, being famous is the worst thing that can ever happen to someone

But I digress. This was really about how through Gospel music, we can tell that he was yearning for the Lord, and his peace, and though he didn’t find it at the end of his life, we don’t know the private conversation that went on between himself and his creator. I ask you to listen to 'Amazing Grace' and then 'The Wonder of You' – the first Gospel, the second more secular, and tell me if you don’t feel the love of Jesus in the way he sings those words.

In fact, his wife Priscilla said in a documentary that that rendition of 'The Wonder of You' was sung to the Lord specifically. And I believe that is worth a lot.

The Gospel according to Kanye – Jesus is King

Love or loathe him, there is no denying that Kanye West has made... END_OF_DOCUMENT_TOKEN_TO_BE_REPLACED

Jonathan McReynolds on The Art of War and more

Everybody loves Shekinah. Their tremendous gifting is only outweighed... END_OF_DOCUMENT_TOKEN_TO_BE_REPLACED

Sinach Talks About Her Relationship With God

Gospel does great at The Grammys

Gospel Tonight
The award winning Muyiwa takes you through the night with the... END_OF_DOCUMENT_TOKEN_TO_BE_REPLACED

The Gospel Selection
From the classic gospel choirs of America to the urban sounds... END_OF_DOCUMENT_TOKEN_TO_BE_REPLACED